Overview of the Temple 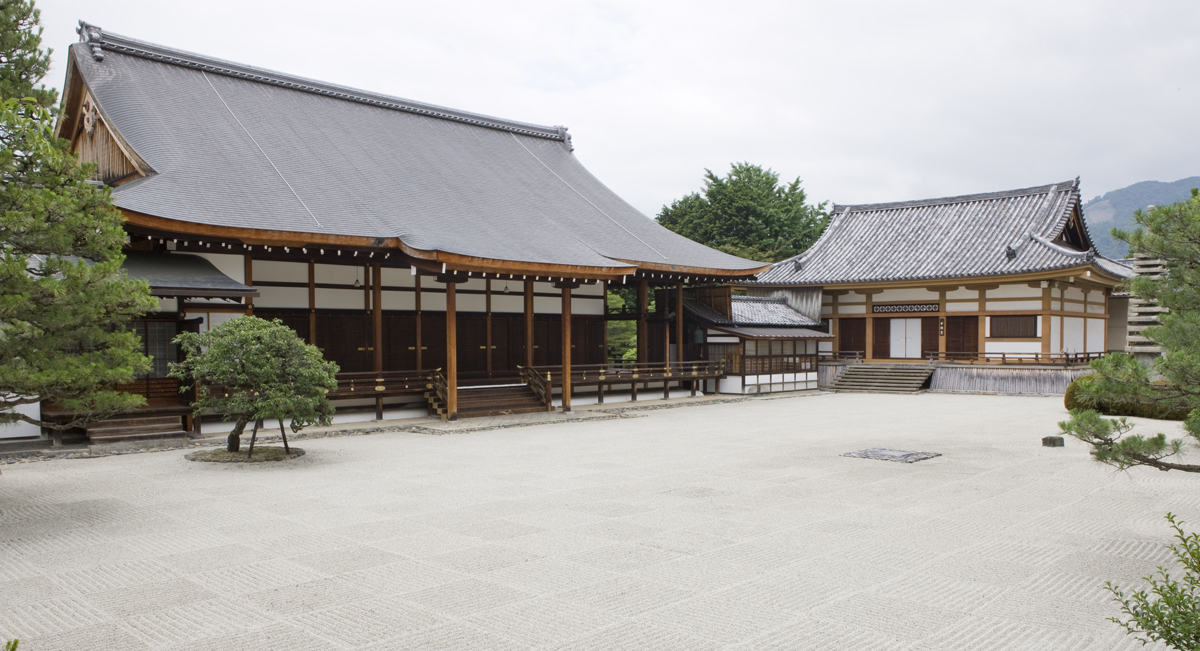 Shogo-in is a headquarter of ‘shugendo’, a Japanese-originated harmonized religion of Buddhism and mountain (or other animism faith) worships. The Temple had changed the sites several times in Kyoto due to fire disasters. The present building was re-constructed in its birthplace in 1676.
The Temple has intimate relationships with our royal family since numerous persons from them, have engaged as its head priest. In 1788, the emperor at that time (named Emperor Kokaku) stayed in the Temple as his temporary imperial palace, to avoid a horrible fire which had burnt most of the city. The building consists of Shinden, the ceremonial and administrative center of the Temple, a study transferred from the imperial palace (registered important cultural heritage).
Inside the building, more than 130 paintings on the sliding doors are conserved. All the painting age over 300 years and all are genuine ones. With those masterpieces, you may feel as if you had been transported through time. 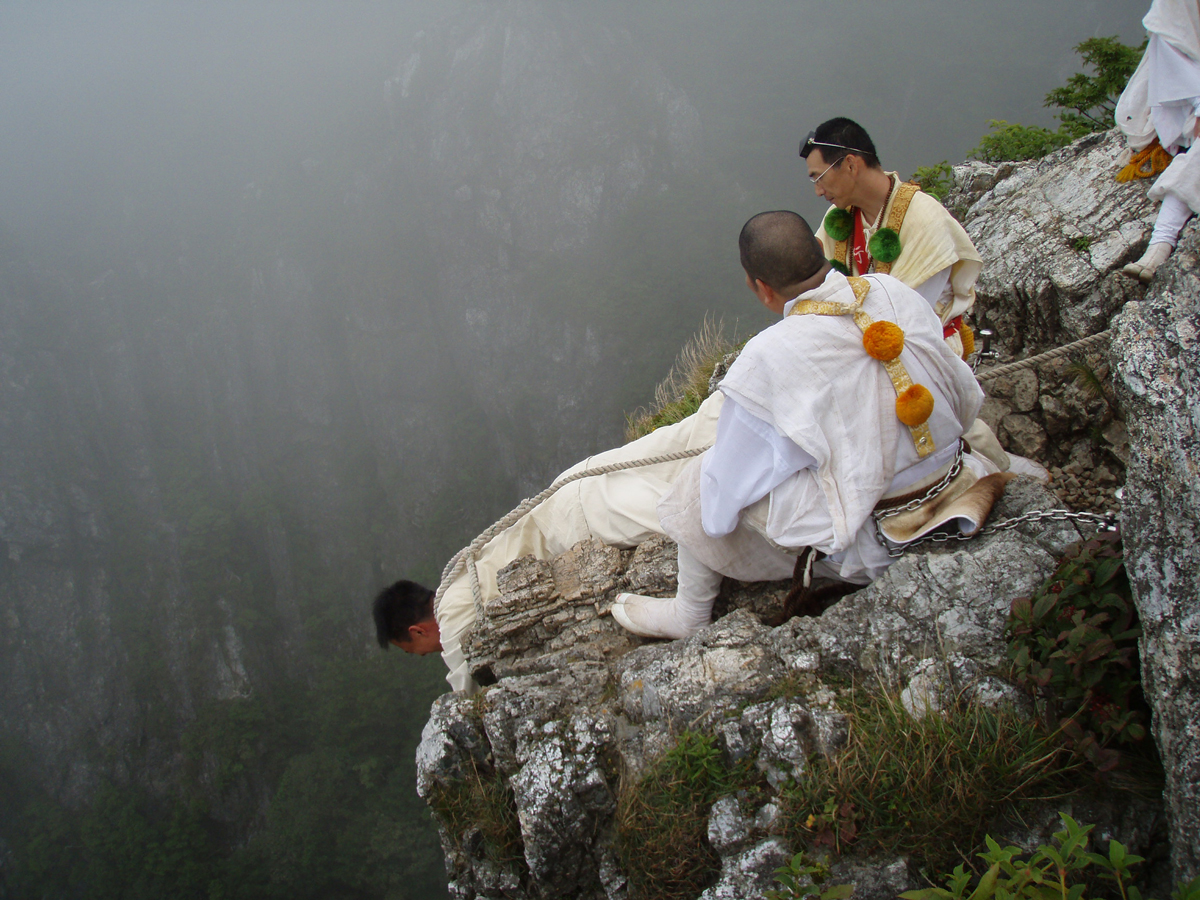 From ancient times, Japanese have believed that the deities inhabit in anyplace – mountain, sea, et al. In other words, they have believed in the nature itself as the deities. In 6th century, the Buddhism was introduced to Japan. But Japanese people did not expel the deities they have believed; they worshiped the deities and the Buddhas in apposition instead. Specifically, they assume that the deities are the temporary appearances of the Buddhas. Shugendo was formed as a result that such a unique faith form was influenced by Confucianism, Taoism and so on.
Shugendo aims to train the mind and the body through mountain practice. The practitioners were called “Yamabushi,” and they wore the traditional uniform named “Suzukake.” To save people, they did not only pray for the deities and the Buddhas, but also utilized their knowledge about medical herbs and so on learned through mountain life.
Japanese were familiar with Shugendo for a long time. But in the Meiji era, Shugendo faced to much oppression. In 1868, the government issued the ordinance to distinguish Shinto and Buddhism. And in 1872, they constituted a law banning Shugendo. In addition, an anti-Buddhism movement brought more difficulty to Shugendo. After that matter, Shogoin’s branch temple, which had amounted to 25000 in the past, decreased sharply to 500. And then, only 150 branch temples are in existence now.
We can hardly ever see Yamabushi in today’s Japan. But their existence are well-known to people, and still continue to practice in various places in Japan.

Inside the building, more than 130 paintings on the sliding doors are conserved. Those are works of Kano Masunobu and Kano Einou, both belonged to the School of Kano, which is the most celebrated one in the history of Japanese paintings. Masunobu belonged to Edo Kano (based in Edo-ancient Tokyo) School, while Einou belonged to Kyoto one. It was quite rare that Edo and Kyoto Kano painters collaborated for one project. The paintings of the Temple are full of vivid colors, gold, natural plants (pine trees), birds (peacocks and cranes) or Chinese historical facts. 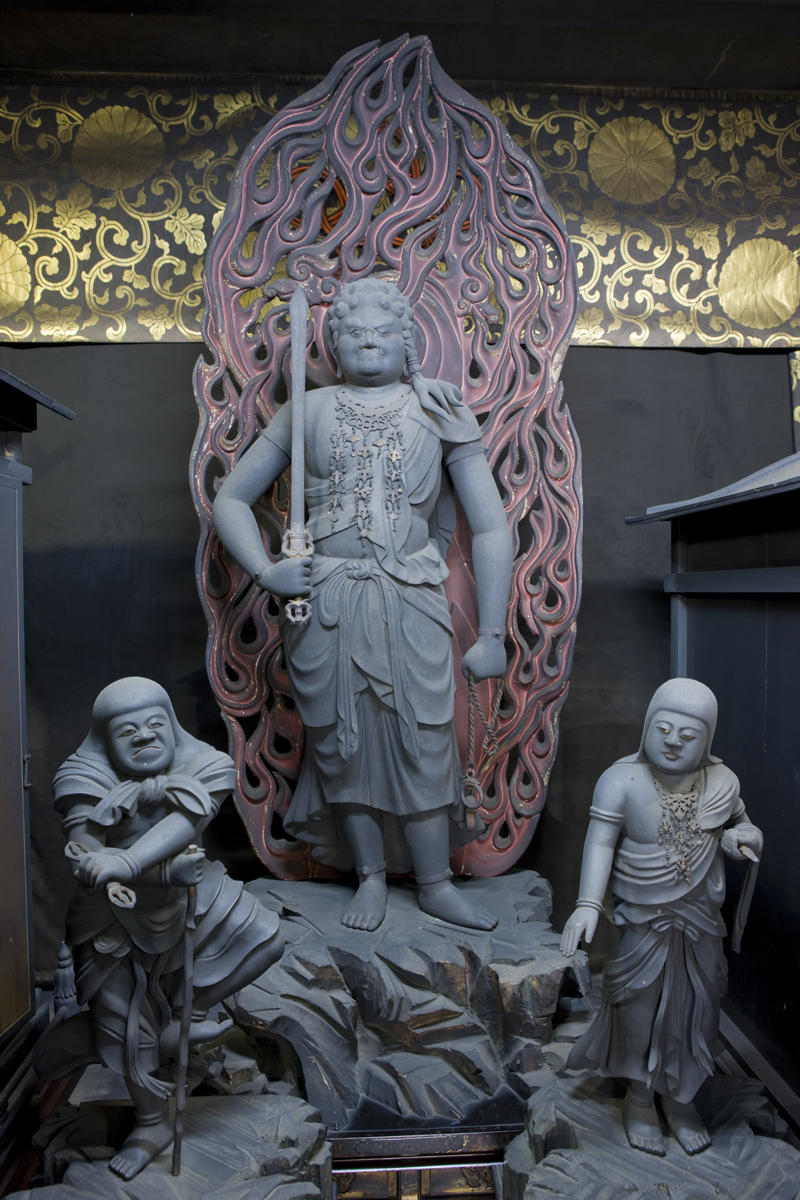 Plenty of statues related to ‘Shugendo’ are conserved in the Temple, such as Fudomyo-Ou, Enno-Gyojya, or Zaou-Gongen.
‘Fudomyo-Ou’ is considered as the principle worship of Shugendo and known as his facial expression of angers. However, his hair style, wrinkles on the face, horns, physical features, standing postures, and his belongings, stand for some Buddhist preaches.
The Temple conserves not only a statue of ‘Fudomyo-Ou’ (registered important cultural heritage), but several other ‘Fudomyo-Ou’ that has been rescued from the abandoned temples.
Enno-Gyojya was alive around 1350 years ago and the founder of Shugendo.
Zaou-Gongen is a consolidated form of three different Buddhist worships, names Shaka-Nyorai, Kannon-Bosatsu and Miroku-Bosatsu and a symbol of the existence of worships.